Well, a few weeks ago, I took a shot at making fried pies. I lived in Gainesville, TX for a while, and miss The Fried Pie Co., so I found a recipe and gave it a shot. The twist? I've been trying to work toward more vegetarian and vegan cooking practices.

It's not a total paradigm shift... I still eat meat occasionally. It's more that I've never been much of a cook, and know I need to change my diet a bit... the American diet is HEAVY on carbs. Bread, sugar, and pasta EVERYWHERE! I needed to move more toward protein, fruit, vegetables... not "no carbs", but "less carbs".

However, there's an additional caveat... my personal motto: "Keep It Simple, Stupid". I'm incredibly absent-minded, and easily distracted by funny words, shiny objects and squirrels. I need to adjust my diet in ways even a scatterbrain like myself can keep up with! So... simple steps. Example: my previous post! Simple, low-maintenance smoothie and coffee, great meal, super-easy to shop, make and clean up.

Anyways, with that in mind... FRIED CHERRY PIES! The original recipe is from veganwolf.com, modified by my personal experience and some discussion from vegan cooks I know at my hackerspace, pumpingstationone.org. 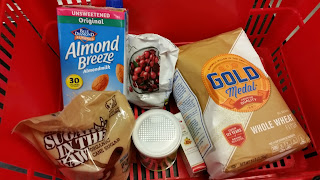 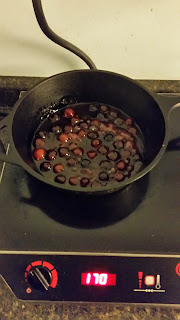 Ended up using a cast-iron skillet on the induction cooktop.

Bring to a boil, let boil two minutes, then remove from heat and let cool. I actually let this cook a bit longer... I was working on an induction cooktop, which is still pretty new to me. The filling turned out just fine. I'm considering substituting mixed berries or apples on my next try! 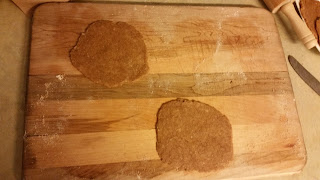 The dough was a challenge: it was grainy. This is where the cold water would have helped!

Add dry ingredients to wet.
Note: I had difficulty with the consistency of the dough. Talking with my baker friends, apparently adding ice water as needed is an option to help with consistency. Good to know!

Separate dough into about 10 equal pieces and roll into balls, then roll flat to about 1/8" thick. Spoon filling into the center with about an inch of room around the edge; fold crust over and press closed around the edge with a fork. 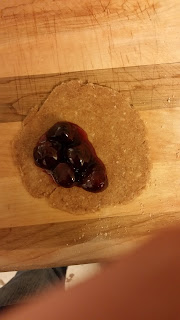 Not quite what I said, but this is what I did. Made the fold-over easier for me. Yeah, I know... finger on the lens! 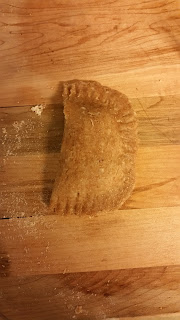 Closed pie, pressed around the edge with a fork.

Here was my greatest challenge: FRYING THEM! Especially considering my lack of experience and not being familiar with an induction cooktop. I managed... but, next time, I think I might try deep-frying them instead. Till then... heat about 1/2 inch of oil in a fry pan and fry each pie for about two minutes, or until golden. 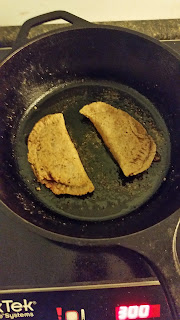 Frying pies! Not my best moment... more of a learning moment!

I had a bit of trouble with the glaze, because I forgot to get powdered sugar and didn't find what was in the 'space til afterward... so I tried powdering regular sugar with a mortar and pestle. Because the 'space has a mortar and pestle. It... wasn't the greatest. But it was dessert! I don't think anyone who tried a pie really minded. 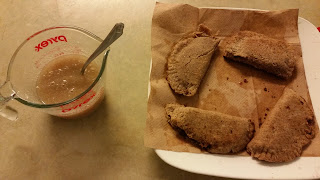 Fried pies, before glazing! I forgot to get a good shot post-glaze. Again, the crust was a bit... grainy.

All in all, my pies weren't evenly cooked, and a couple ended up a little well-done on one side... but I learned a LOT! It was quite an experiment. The whole experience took me about four hours and had one casualty (a crust I dropped), but everyone that tried the resulting pies seemed to enjoy them!

I think I'll be trying this again, and soon... but, lately, I've been distracted by blacksmithing!

Madman with a box