I'm finally back in the city after an extended weekend at Bianca's. I have to admit, I'm bummed that I didn't get to hang out with The Boy, but seeing how much progress Baby She-Hulk has made is FANTASTIC. She's very bright. And funny. And busy. So her mother's genetics are dominant in her personality. Big bonus.

I'm wiped out, I've been awake for 26 hours now, but I went to PS1 immediately after getting back. I was immediately energized... it was Member Meeting / Open House night, and 300 Seconds of Fame. One member did a piece about his tour of a nearby waste processing plant, another talked about her discovery of jazz earlier in her life and how it influenced her tap dancing. Someone else talked about his first month at PS1, coming in knowing nothing and what he'd learned, and yet another member gave what he called a "mini TED Talk" about the power of caring about strangers.

Jennie and I finally buckled down... at about 4AM... and decided we must do some welding. After much hesitation during set-up and prep, we finally started putting together some scrap into a Brobdingnagian junk sculpture. I should have taken pictures of it... if it's still in the bucket when I go back, I will. We tried several joints and angles and actually learned rather a lot. It turns out welding can be done by normal people, and isn't some kind of metal-and-electricity wizardry reserved only for Pureblood shop technicians! We were both pretty excited for our progress. She has a remarkably steady hand for welding... I'm rather jealous. I've been making tiny circling motions as I go, because it lets me control and correct more easily with my tremor... I can correct orbits as I progress. She also did an amazing fill for a significant gap that I was unable to emulate.

Whoops... I need to sleep. Now. I fell asleep typing that. Be right back!

So, earlier last night, after 300 Seconds of Fame, the Power Racing team had a meeting. The base frame had been finished while I was gone, and it is gorgeous! I don't want to do anything with it because it looks so nice! Adriana, Julie and Lauren made it a real work of art! 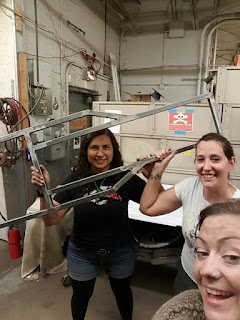 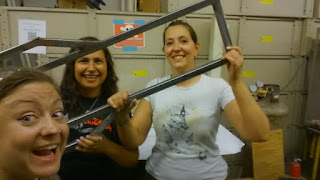 We talked about the race coming up (Kansas City, MO on the 25th and 26th!), travel and housing accommodations, and what we needed to do for the next steps of the frame build. We're using a headset from a bicycle for our steering assembly, although handlebars are awkward and we may need to rebuild them into something more compact. We propped up the frame with the rear axle loosely assembled to it, estimated where the seat will be and put the shell on, then had Adriana sit in it to help figure out just where the steering column will be. (Her feet are on the hood for mostly comic reasons!) 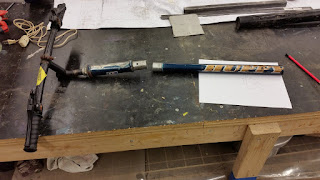 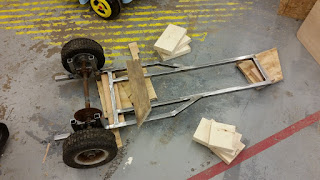 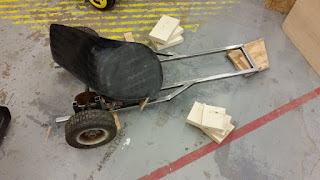 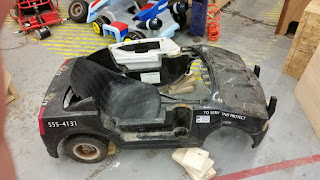 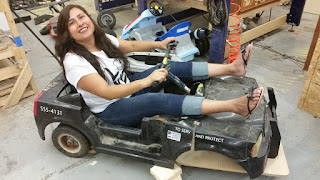 For now, the plan is that anything left with rust (i.e. that whole rear axle assembly) needs to be sandblasted, In the meantime, we're also fielding a modified Razor dune buggy, and another job is that the entire rear assembly needs to be taken apart. I'm all for that... I can take stuff apart! 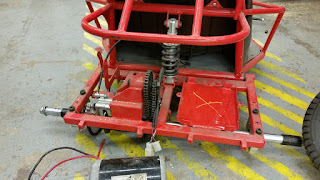 By the way folks: Except for the shot of Adriana in the Bluesmobile (Carlos helped me with that coz my hands were just shaking too much right then), and the first two of the initial frame finish (obviously Lauren taking those), I took all these pictures myself! I had to take a lot of shots each time because most of them end up looking like maybe Bigfoot is building a racer (maybe it's a racer, maybe it's a guy in a gorilla suit!), and then I sort through them on my compy and find the best quality ones to post, but I feel pretty good about these!

TONIGHT! ChiVinMoto is having a garage night at PS1, starting at 6:30PM... grilling, smack talk and vintage motorcycles are the order of things. There's also CAJOO at 7PM if you'd like to dabble in music, whether you're a pro, a dabbler or completely clueless, you're welcome to pick up or bring an instrument and make noises for fun. You might learn something! Python Open Office Hours is also at 7PM if you're working on some manner of programming (it's not limited to Python!) and/or would like to pick people's brains about a programming roadblock you've hit. Lastly, there is a Tier 1 Hot and Cold Metals Intro and Authorization Jamboree starting at 7PM: this does require membership to get authorized, but if you're not familiar with cold metals shop (precision machine cutting of metals to make high-precision tools and parts) and/or hot metals shop (higher volume working of metals when precision isn't quite as important, using tools like the metals chopsaw, pedestal and angle grinders, MIG and TIG welders and an honest-to-Bob blacksmithing forge.), then this is a prime opportunity to hear more about them both and learn something about the tools used therein!

Anyways, I still smell like welding fumes, so I'm gonna take a shower and them I'm headed back to the 'space! Maybe I'll see you there... it's gonna be a busy night, but, as always, you're welcome to come, hang out, chat with folks, explore, and see what's happening!

Madman with a box